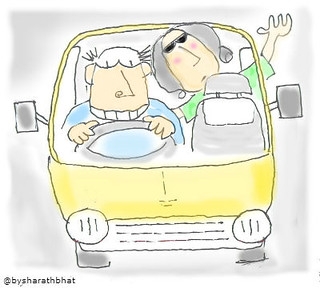 Just found a group on facebook set up by irate customers of a taxicab service in Bangalore – it already has 400 members. If I were connected with customer support at the company, I would probably join this group to listen to their side of the story. If you jump in early, you might even help prevent serious action from customers who have probably tried other avenues to seek help or redressal.

It’s not going to be easy because you become a sitting duck, straight away. On facebook, you may not hear angry decibels, but you’re right in the middle of missiles flying in from all directions. Use the comment interface on the group to respond to queries or complaints. Always give a fair and honest response, even though you may not be able to handle all complaints at one go.

In a situation like this, you need active support from your organization, with a process in place to react quickly and constructively. You also need a corrective mechanism that can address each complaint in a fair and responsible manner.

The number on this group when I last checked was around 400. With a digital implosion, this figure could soon grow to 4000 – maybe more. Bringing together other people having issues with cab services in general, and angry enough to take a pot shot at anybody – beginning with you.

For a start just place one ear (at least) to the ground and see if you can detect any rumblings around your service or brand. If you do, say a small prayer and get into rescue mode – sooner than later.